Are You a Helicopter Parent? 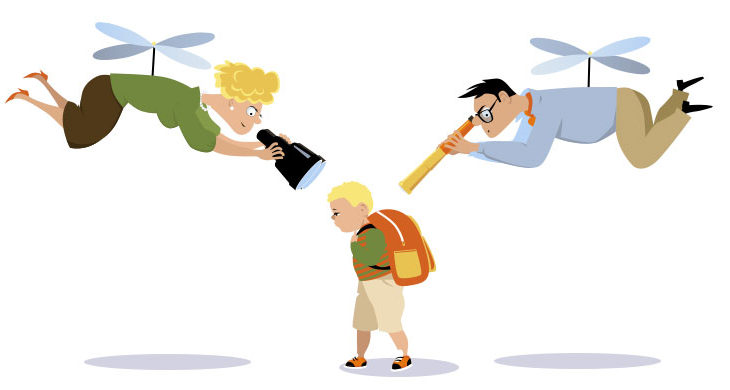 Read about the heart-warming experience of a parent who fearlessly travels the world.

A Tale of Independence

When my daughter was about 8, I let her and a friend rub off to explore our local botanic garden on their own while we were picnicking there one day.

I didn’t know that before we left the house she’d taken $10 from her piggy bank and that when they left me, she and her friend had made a beeline for the café.

They wanted the experience of buying something on their own and decided to share a soda and brownie. But prices weren’t posted and the tally turned out to be far more than she wanted to pay for their treat. She wasn’t sure she could change her mind and didn’t want to disappoint her friend and ruin the adventure, so she reluctantly paid.

I learned all of this later that night when she confessed it all in a teary torrent of buyer’s remorse.

I explained that it was not only okay but the right thing to ask for prices when they aren’t posted, and that it is alright to change your mind if something costs more than you think it should. We also agreed that a true friend would have understood that the snack was too expensive and if she did get mad she probably wasn’t a very good friend.

For me this escapade neatly demonstrates why it’s equally essential and difficult to gradually step back and give our kids independence.

It was a small event but a significant learning experience. And these were lessons I preferred she learn over a $5 brownie at age 8 then as a teen or adult when the stakes could be much higher.

What should we do as parents?

It’s painful watching kids do things on their own and make mistakes but, “this is how they build resilience, the ability to cope with and handle setbacks,” says Dr. Richard Horowitz, a parenting coach and the author of Family Centered Parenting. As kids manage to navigate situations without making mistakes, “They grow more confident and self-sufficient.”

It’s nearly impossible to find a child-development expert that doesn’t tout the importance of allowing our future adults to gradually become more independent.

But much has been written about helicopter parents, tiger moms and now lawnmower parents (who remove any and all obstacles for their kids, even as they go off to college). It’s clear this is an aspect of parenting many of us struggle with.

“Parents often have their own childhood nightmares and they want to protect their kids from any harm,” explains Sudiksha Joshi, a youth learning advocate.

And, several experts say, the never-ending news cycle allows us to hear about danger more. This triggers our protective instincts more than might be warranted by actual statistics.

Finally, “There’s a mindset that as parents we know how to do things better and so we tend to swoop in and do them,” explains education counselor Marni Pasch. “Letting go of that control can be difficult,” she says, especially in an increasingly competitive education system and job market. “It’s our role as parents to take care of our children.”

Yet our reluctance to let go could be taking a toll: A study out of San Diego State University shows that only 55% of 12th graders have ever worked for pay and 73% know how to drive, down from 76% and 88%, respectively in the 1970s. “Today’s teens are taking longer to engage in both the pleasures and the responsibilities of adulthood,” the author of the study told USA Today.

When responsibility is thrust upon young adults they struggle to cope with it. In 2016, 41% of college freshmen reported feeling overwhelmed by their responsibilities, a big jump from 18% in 1985, when the Higher Education Research Institute at U.C.L.A began annually asking the question.

According to the Association for University and College Counseling Center Directors anxiety outpaces depression by a growing margin as the reason students seek counseling. In 2009, 37.5% of student complained of anxiety, almost even with the 36.8% reporting depression. By 2016 those numbers had risen to 50.6% for anxiety and only 41.2% for depression.

If you appreciate the importance of preparing your children to be self-sufficient adults but don’t know where to begin, consider these four tips.

Self-sufficiency doesn’t happen overnight and it’s not instinctive. We gradually teach our kids to be independent via conversations and activities throughout their childhood.

For example, if you want your child to walk to school four blocks away, you’ll first let them walk down your block and back, then practice crossing the street safely and eventually walking the whole way. As they progress you would talk to them about strangers, asking someone safe for directions, and how to watch for cars and traffic flow and streetlights.

Independence doesn’t just mean being able to let our kids out of our sight; it also means teaching them to confidently speak for themselves and make decisions.

“Part of teaching independence is letting them choose and order what they eat in a restaurant, what clothes they wear, which friends they make,” Joshi explains.

Take homework for example. In the lower grades you’ll probably sit and do it with your child. Later in elementary school, as long as everything is going well you might simply ask what they have to do each night and leave them alone to do it.

Middle school brings multiple teachers and deadlines to keep track of. It’s tempting to become your child’s time organizer—and some kids will need that. For others it can be an opportunity to teach time management by asking them how they’ll prioritize assignments and organize their free time to get everything done. Ideally, in high school they can do it without your coaching.

When kids first start asking to do things on their own, often our first instinct is to say no. But, Joshi suggests thinking about why we’re saying no and perhaps using that self-reflection to find a way to say yes or at least work start working toward yes.

For example, around age 7 my daughter started asking to pack her own suitcase for vacations. I was envisioning a suitcase full of princess dresses and nary a pair of underpants. It would have been easy to say no.

Instead, I told her what type of items she would need for the trip, reserved final approval and assumed I’d have to repack everything. But she actually did a good job. There were no princess dresses and my only suggested was that she might want more than one pair of socks for a ten-day trip.

I have one less thing to do when we go away, she’s gained self-confidence and seeing her use common sense made me more willing to entertain other requests.

Kids are more likely to be excited and motivated to achieve when they get to choose at least some of their own interests.

Summer camps and after-school programs with a range of activities give them the opportunity to discover new interests without our input. Sometimes these include activities it might never occur to us to introduce. For example, I know two different families whose tweens developed an interest in archery after discovering the sport at camp; their parents now bring them to local range to practice.

Letting go is one of the hardest things for parents to do. But hopefully, if we learn to embrace and encourage our kids’ independence a little at a time, then when the time comes for them to be on their own they’re ready–and we are, too.

Eileen Gunn is a native New Yorker, consumer and business journalist, fearless world traveler and mom of one. She’s written a career-advice book that took lessons from extreme sports, climbed a volcano in the pitch black, gone kayaking in a typhoon, had a very unplanned c-section and (most daring of all) launched FamiliesGo!. Her goal: Give parents tools and information they can use to plan memorable vacations that kids and adults will enjoy.

Monarch Blog
Related Posts
9 Reasons Why Great Parents Send Their Kids to Summer Camp 13 Things People In A Small Town Do For Fun How To Find Fun, Educational Activities To Do With Your Kids Best Ways to Transition Children How to Teach Sportsmanship to Children
LAVC Tour Video
LACC Tour Video